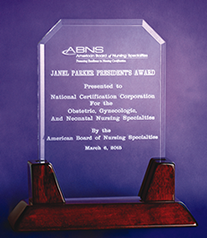 The National Certification Corporation (NCC) was honored to receive the 2015 Janel Parker President’s Award for the Certified Nurses are Everywhere public awareness campaign. This award was given out by American Board of Nursing Specialties (ABNS) at their 2015 March Assembly. This award is considered a huge honor and has only been given out a few times in the history of ABNS.  NCC was nominated for the award by the ABNS Board of Directors.

Certified Nurses are Everywhere is the first nationally visible awareness campaign focused on educating the public about the value of certified nurses.

Envisioned and managed by NCC, Certified Nurses are Everywhere had support from several ABNS members to help insure its success. The campaign created billboards, transit signs, several videos and the website CertifiedNurses.org. The TV airings have been viewed over 265 million times and  the signs have been seen on buses, in shopping malls and in several large hub airports. The signs will have an estimated 688 million views, through placements in Atlanta, Sacramento, Reno, Chicago and Washington DC.

The ABNS Board of Directors stated “There is no way ABNS alone or individual member organizations could afford to have the national exposure to educate the public in this way”.  The Certified Nurses are Everywhere campaign was awarded for its significant contribution to specialty nursing certification awareness.

NCC is honored to have been nominated and chosen.

The Janel Parker Presidents Award is given biennially to recognize an individual or organization within the ABNS membership that has made significant contributions to specialty nursing certification and to the association. Such as, accomplishments that promote the value of specialty nursing certification to individuals, healthcare organizations;, and/or the public that have led to increased numbers of certified nurses.